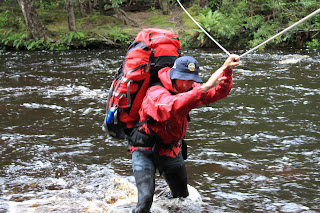 There are 2 ways to get to Maria Island, by ferry or you can choose what http://www.adventureseekers.com.au/ do, and fly. There is no better way to experience Tasmania than from the air. Our Maria Island guided walk which runs from November 2010 through to April 2011 begins with a spectacular charter flight up the east coast of Tasmania before landing at Darlington on Maria Island. As soon as you land you will be blown away by the breathtaking landscape. This tour is a fantastic four day walking tour not to be missed. Check out our website for details and a itinerary.
Posted by Tasmanian Hikes Blog at 5:43 PM No comments:

Posted by Tasmanian Hikes Blog at 3:38 PM No comments:

Adventure Seekers run outdoor activities such as abseiling and rock climbing that small businesses and corporations can use as tools for team development. Our sessions run for 3 hours and build trust, better communication and self confidence.
Posted by Tasmanian Hikes Blog at 9:31 PM No comments:

2010 / 2011 South Coast Track Guided Walk departure dates will be up on the website soon http://www.adventureseekers.com.au and its probally a good time to work on your fitness and check your gear especially your boots. Need a new pair? Buy them know and wear them in to avoid any possible discomfort later on. Our 1st South Coast Track walk departs 13th November then once a month until February 2011. Like to secure a spot? Give us a call.
Posted by Tasmanian Hikes Blog at 9:19 PM No comments:

Looking for a bit of adventure? Come and try our 3 hour rockclimbing or abseiling activities at Kangaroo Point. These activities run seperately and are great for novices or beginners and kick off most mornings at 0830am.

You may also like to give our sunset abseil a go. As the sun sets you will abseil into the night with Brisbane's city lights as your backdrop. This activity starts at 4.30pm and finishes at 6.30pm and includes a refreshing drinks and nibbles. www.adventureseekers.com.au
Posted by Tasmanian Hikes Blog at 6:59 PM No comments: 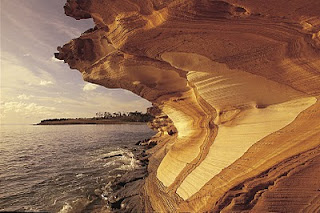 Day 1 We leave Hobart Airport and fly south over Port Arthur and the Tasman Peninsula while observing the intriguing geological features of the towering seacliffs. The coastline has numerous underwater cliffs and caves, the habitat for abundant marine life. We round Cape Pillar and Tasman Island where we get a chance to see Austrailian Fur Seal colonies on the rocks below. Our flight then tracks up the coast to Maria Island and we get spectacular veiws of the lay of the island and where our 4 day walk will travel. Flying further north we pass over Schouten Island then come to the beautiful Freycinet Peninsula and the much noted Wineglass Bay (voted one of the worlds top 10 beaches) and Hazards Beach. We turn around at Coles Bay and head back south touching down at Darlington on Maria Island. From Darlington we visit the amazingly patterned painted cliffs on our journey to Encampment Cove. We can take in a evening swim in the sheltered cove and visit the historic convict cells at Point Lesueur.

Day 2 We stroll along the beautiful beach of Shoal Bay on our way to Robeys Farm, once an early period sheep station. Now, the sheep have been removed and some building ruins and old machinery remain. After lunch we walk to Haunted Bay and the expansive veiws to the Tasman Sea. We then retrace our footsteps along the shores of Shoal Bay passing through forest and coastal vegetation to historic Frenchs Farm, home of the French family in the mid 1900. We camp in the picturesque clearing of the now dissused partially restored farmhouse that gives us ocean and beach veiws.

Day 3 Today we travel inland throught the heart of Maria Island. 5km along the track we have the opportunity to climb Mount Maria before visiting the Oast House and our final destination, Darlington.

Day 4 We spend most of the day exploring Darlington, the buildings, the relics and the fantastic Fossil Bay and cliffs. For the energetic we can also climb Bishop and Clerk. From Darlington we catch the 1 hour voyage on the Maria Island Ferry across the Mercury Passage to Triabunna and our waiting bus. Our journey back to Hobart will take us about 1 1/2 hours.

www.adventureseekers.com.au
Posted by Tasmanian Hikes Blog at 1:54 PM No comments: 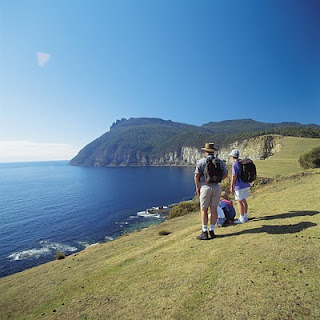 Introducing a new Tasmanian Walking Tour. Combine a spectacular scenic flight around the Tasman Peninsula, Freycinet Peninsula and Wineglass Bay landing on Maria Island with a 4 day guided walking tour through a breathtaking landscape.Maria Island lies 10km off the east coast of Tasmania, Australia and we access it by an amazing private charter flight. Maria is a peaceful and relaxing place. There are no vehicles, just beautiful scenery, deserted beaches and abundant wildlife. To add to the beauty of the island, she has an intriguing history. After the first explorers, came whalers and sealers and later the island was a convict station.Your guides will immerse you in the islands history and lead you on a amazing 4 day exploration of Maria. Your accommodation are twin share tents, but what other way would you have it on this island paradise. Camping does not mean dehydrated foods. We end each day with a meal of fresh local produce and fine Tasmanian Wines.
Posted by Tasmanian Hikes Blog at 7:33 PM No comments: