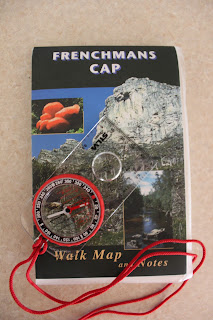 Well, Im going to tell you straight up that my preference is the map.

I admit that the GPS is accurate and has some pretty whiz bang features but like all electronic devises things can go wrong with them, batteries go flat, you drop it, then it does work etc etc...

The map however is pretty straight forward. It doesn't require any batteries and it will keep on working 24/7. All you will need is to learn how to read one and study up on the use of a compass.

With your maps I suggest to get them laminated (sealed in a laminated pouch). It will last much longer (wear & tear) and will be impervious to rain. Most office supply shops provide this service or more popular maps come pre-laminated from specialist map shops.

Oh... I just about forgot to tell you that they weigh a lot less too!
Posted by Tasmanian Hikes Blog at 6:57 PM No comments:

Why you should take a guided walk in Tasmania 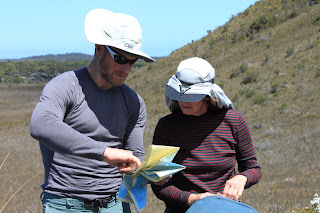 By choosing to do a guided walk, your guiding company will handle all of the organizational aspects of the tour and deliver to you, the client a professionally researched and rewarding itinerary.
At Adventure Seekers we operate multiday walks such as the iconic Overland Track, South Coast Track and Walls of Jerusalem to name a few.
This blog talks about what Adventure Seekers offer on their guided walks as opposed to doing the walk independently and arranging the logistics yourself.
Your tour begins and ends with the convenience of the company’s own transportation, which gives us the flexibility of when we start and end the walk and collect you from your accommodation rather than relying on a scheduled service.
Your tour guides are the backbone of the tour. They ensure that your objectives are met and generally look after your wellbeing. Your guides will interpret the landscape, carry all of the group equipment and food thus allowing your own packs to be light and manageable.
The meals that the guides whip up on specialist cooking equipment are hearty and flavorsome. You’ll enjoy dinners such as risottos, beef stews, cereal and fruit for breakfast and gourmet wraps for lunch.
Safety on your tour is taken seriously and each guide is 1st aid qualified and trained in emergency procedures. Guides carry 1st aid kits and emergency equipment that includes an emergency locator beacon and a satellite telephone.
Maps of the track are also carried for guides and clients to reference.
The company also provides your accommodation while on the walk and uses activity specific, 4 - season 2 - person tents.
Organizing your own walk can be quite challenging and specialized equipment can be costly.  A guided walk will ensure your safety, establish new friendships and educate you about the special places that you will visit.
Posted by Tasmanian Hikes Blog at 11:36 AM No comments: 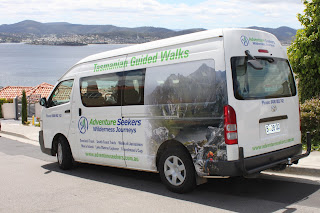 Getting to the start as well as back from many of Tasmania's bushwalking tracks can be quite challenging.

Organising transport should be done in advance before booking your tours, and even if you are self guiding. Some services are limited by their frequency and timing.

Adventure Seekers based in Hobart may be your answer to get you or your group to walks such as the Overland Track, Walls of Jerusalem or Scott's Peak - the start of the Western Arthur Traverse and the Port Davey Track.

Generally if you are a group of at least 3 we can get you to the trailhead and back at a time and day that is convenient for you. A group of 5 or more will attract a discounted rate.

The next time you need bushwalker transport in Tasmania, consider us.

Posted by Tasmanian Hikes Blog at 5:50 PM No comments:

A Day On Maria 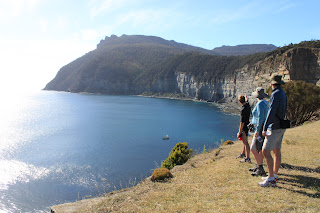 A trip to Tasmania wouldn't be complete without doing a day tour to Maria Island.
Maria Island is a National Park and a former probation station. A convict station was first established on the island in 1825 preceding the establishment of Port Arthur.
The convict era buildings are well preserved and were built by the convicts themselves.
Our day tour pieces together the past, talks about the 1st settlers of Maria and takes you to magical places like the Painted Cliffs and Skipping Ridge.
The walking is gentle, you'll see abundant wildlife such as Cape Barren Geese, Native Hens, Forester Kangaroos, Pademelons and Wombats. Tours leave Hobart daily November through to April.
Posted by Tasmanian Hikes Blog at 12:18 PM No comments: 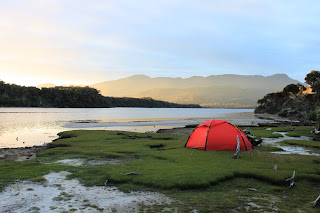 Our Par Avion flight from Hobart to Melaleuca was delayed 6 hours due to a slow moving cold front lingering in the west.
Finally after touching down around 4pm we set off on our guided walk towards Cox Bight and Point Eric.
A storm burst followed us into camp, which happened to be the last threat of rain that we would have until the evening of day 8.
The following morning it was a short beach walk to Black Cliff which you need to wade through the surf in order to continue.
It was here at Black Cliff where a sudden gust of wind picked up John's immaculately kept Akubra hat and tossed it into the Southern Ocean, never to be seen again.
Pressing on we soon arrived at the Louisa River camp, our springboard for the next days accent of the Ironbound Range. The formidable Ironbounds took us 12 hours and our views were limited but at least it didn't rain.
Day 4 was a rest day and we did exactly that. Numerous cups of tea, stoking the fire and an afternoon nap were in order.
Later that afternoon a walker rolled into camp after negotiating the Ironbounds. Little did we know but what he pulled out of his pack was the beginning of an amazing reunion for one of our clients.
Surprisingly in his hand was John's Akubra! What was once a well kept hat was now all puckered up and filled with the sands and sea life of Cox's Bight. John immediately washed it in the creek and started to dry it over the open fire then re-shaped it with a smile.
Prion Beach, Surprise Bay and Granite Beach where all picture perfect and the South Cape Range lived up to its reputation as a hard slog at the end of a great walk.
In the early evening of day 8 a stormed rolled into South Cape Rivulet, lightening and thunder cracked directly above us.
Showers continued through to the next morning as we set off through Blowhole Valley and the end of our walk at Cockle Creek.
Posted by Tasmanian Hikes Blog at 12:19 PM No comments: