I met Maurice from Glowworm Bicycles in Tasmania this year and discovered that he distributes Ezee brand of Electric Bicycles throughout Australia.

As we talked I was immediately impressed about his road trip form Cape York to Sydney on an Ezee Electric Bike. 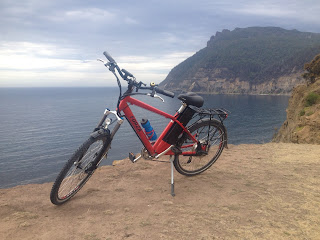 His epic journey got me thinking whether an electric bike would be suitable as a support vehicle on our Maria Island Guided Walk in Tasmania.

Currently we use a conventional mountain bike and Bob trailer as support to the tour in moving group gear and supplies a distance of 11km down the island.

I was pleased to know that there was a supplier of the Ezee Electric Bike in Hobart and duly went in to see Ahmet of Eco-Bikes to check the models out.


The idea of an electric bike seemed like a easier and more efficient way to move our gear but we were unsure whether it would stand up to the terrain on Maria Island. Finally we chose the Forza, rear wheel drive as the likely candidate and were eager to put it through its paces.

The attached video shows the type of terrain ranging from hard dirt to patches of soft sand which the Forza makes an easy meal of.

On average we do 2 trips to our base camp (33km) and then one return trip to our origin (11km) before we choose to recharge the 20A/h battery.

After 44km of riding, towing 30kg in the Bob trailer, 20kg on the rack plus the rider and a 15kg back pack we have 2 lights of power left on the controller. Average load = 140kg.

Modifications to the Forza are heavy duty pedals and puncture proof Schwalbe tyres.

After 500km of riding on the island the only problem that we had had with the Forza was a total power loss due to loosening connectors on the base of the battery (mainly due to the terrain). In summary we are very pleased with the Forza and the support from our supplier.