Maria Island - Give the Devil it's Due

In 2012, fifteen Tasmania Devils were released on Maria Island, part of a captive breeding program, free from the facial tumor disease [FTD] which is threatening the survival of the species.

These fifteen Tasmanian Devils set off for Maria Island in an effort to save their species from extinction and against the odds, we are pleased to say to date, that they are thriving and breeding well.

Numbers today are estimated to be around 85 - 90 Devils. 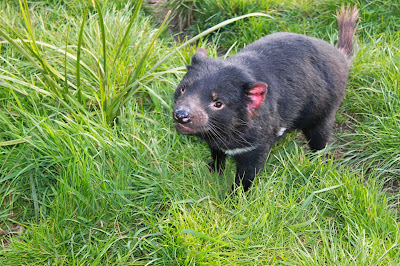 The initial release area was in the middle of the island at French's Farm and only after a couple of months motion cameras and radio collars recorded the Devils as being widespread throughout the island.

Maria Island has a total area of 115km2 and lies 4km off Tasmania's East Coast. The Tasmanian Devil can run up to 13km/h and covers an average distance of 8.6km every night.

Tasmanian Devils are listed as vulnerable, but with a captive breeding program such as this one on Maria Island, it will help to protect the species.
Posted by Tasmanian Hikes Blog at 6:18 PM